Bowls of Shark Fin Soup Saved from Being Served

April Togetherness Prize Winners Announced!
We are delighted to have Ms Jenny Pat, Host of "Dealers" on Discovery Channel and Director of Gallery Article as our indepen... more
read more

Photobooth Hong Kong Special Prize Winners Announced!
Congratulations Kat & Joe! Among all the contestants who entered between 23 to 30 April 2012, they were selected to be w... more
read more 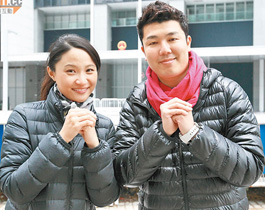 Shark-lovers! It’s that wonderful time again where we get to share some more love amongst our shark-free wedding contestants with a bonus Togetherness Prize!

The lucky couple to win January’s Togetherness Prize are Dik Ming Casta & Kwok Fan Edward, who got married on 26 February 2012. Their prize is 4 separate home deliveries of locally grown, organic produce, courtesy of Homegrown Foods. After all, along with taking regular exercise, eating healthily is one of the best ways to ensure a long married life together!

This month’s independent judge was none other than Sharon Kwok Pong – the former actress known more now for her efforts to increase public awareness of global environmental issues. Sharon is an ambassador for a number of charities, including the SPCA, and has been a long term supporter of HK Shark Foundation.

Sharon says “Dik Ming and Fan Fan were my favourite couple from January’s entrants – It was honestly not an easy decision but, in their entry, they seem to be very unpretentious and genuine about the issue and I’m impressed that they managed to convince their traditional parents to support them with a fin free banquet. It’s wonderful to see so many young couples doing their best for our marine environments. The world’s oceans needs heroes like them! Please continue to spread the word!”